The Dracula Dossier is a fully improvised campaign for Night’s Black Agents. Players follow up leads in the margins of Dracula Unredacted, a rare edition of Bram Stoker’s masterpiece that reveals the terrifying truth behind the fiction. They’ll chase down the real characters from Stoker’s novel, their descendants in the present, and the British agents caught in the backblast of MI6’s failed attempt to recruit Dracula. 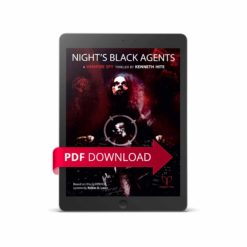