Rakshasas & Reavers. A collection of new monsters that Rob Heinsoo and Jonathan Tweet enjoy inflicting on their players—and now you can unleash them at your table. These magical masterminds, icon-trained kobolds, and cloaked skeletal phantoms have surprising abilities that challenge adventurers to think hard about their tactics.

Phoenix. A Bestiary-style writeup of the phoenix, specific phoenixes who serve several of the icons, and a few of the effects a close connection with the phoenix might have on your player character. By ASH LAW & Rob Heinsoo.

Coin Tricks. Give those monster-guarded piles of coins a fun twist with ghoul-stamped currency, hellhole gold, coin zombies, and more! By Rob Heinsoo and Lynne Hardy.

Temple of the Sun Cabal. To save the world, sometimes you gotta save a vampire—particularly when the friendly neighborhood sun cult is ten solar flares past insane. An adventure for four to six 5th level characters. By Wade Rockett (based on fan suggestions at Gen Con 2015 – listen to the seminar).

Shades of Fey. Who are the fey, if they aren’t principally connected to the Elf Queen? Here are ten intriguing alternatives with consequences for story and mechanics, similar to what was done for devils in 13 True Ways. Also includes a double handful of fey monsters with different attributes depending on which name they are using, and at least one player character surprise. By Steven Warzeha.

Alarums & Incursions: Downtime for Six Icons. Fun random tables to generate mini-stories for player characters between adventures, or figure out what a character was up to when their player couldn’t make it to Game Night. Each icon-related task or experience includes a suggested contact, a temporary background, or a reward. GMs can also use these tables to generate zany plot ideas for NPCs related to the Archmage, Crusader, Diabolist, Dwarf King, Elf Queen, and Emperor. By Gareth Ryder-Hanrahan.

Swords Against the Dead / The Van Helsing Letter, a Free RPG Day release which features both 13th Age and Dracula Dossier content.

Mounted Combat. Rules for riding horses, war rhinos, giant lizards, bison, giant spiders, sable antelopes, and other critters into 13th Age battles. If you recognized some of these as Gloranthan creatures, that’s because this issue of the Monthly will include content aimed at 13th Age in Glorantha that will be perfectly at home in other fantasy campaign worlds. By Rob Heinsoo.

Nymphs. A 13th Age Bestiary-style entry for magical guardians created by the Elf Queen, who gradually leave the Queen’s magic behind and become part of nature’s rhythms—as controlled by the High Druid. What happens to ancient elven secrets when they’re finally allowed to blossom? By Cal Moore & Rob Heinsoo.

Further Alarums: Downtime for Seven Icons. More random tables for your player characters’ between-adventure mini-stories—this time for heroes connected to the Great Gold Wyrm, High Druid, Lich King, Orc Lord, Priestess, Prince of Shadows, and the Three. Each mini-story includes a reward, a temporary background, or a temporary contact; plus a question or two that will help players contribute to the campaign. By Gareth Ryder-Hanrahan.

High Druid’s World. A collection of playable monster stats for NPC druids and powerful druidic dragons. Creatures from level 3 to level 11 demonstrate how player-character style spells can be adapted to ‘monstrous’ applications. Also includes ideas on the philosophy of the High Druid and notes on what’s hidden by the green canopies of the forests on our cityfolk map of the Dragon Empire. By Rob Heinsoo.

You can see the collected content available in Volume 1 here. 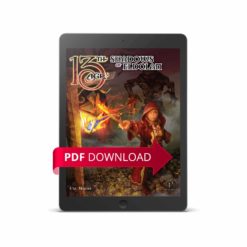