Ever since the Sudden Mutation Event, people have been able to fly. Phase through walls. Read minds. Shoot bolts of energy from their fingertips. Walk into dreams. As members of the elite Heightened Crime Investigation Unit, you and your fellow detectives solve crimes involving the city’s mutant community.

Here you’ll find official materials as well as useful game resources and play aids created by the Esoterrorists fan community. A link to a third-party site doesn’t mean that we agree with or endorse all of the opinions on that site.

The Quade Diagram
A more printer-friendly version of the Quade diagram.

This chapter from MCB describes the role of the PCs and gives some background to the game.

A very useful Reference Sheet for UK players, also one for US players (thanks to Charles Gordon Mitchell for these).

Ripped from the headlines – Rights Holders

Ripped from the headlines – The Powers Cup

Leading the scientific charge is the mediagenic, indefatigable Dr. Lucius Quade. He coined the term for the scientific study of mutant genes and abilities, anamorphology, and is routinely called on to weigh in on any social or political controversy surrounding mutant rights.

The Trouble with Tasers

Robin Laws discusses the use of Tasers in GUMSHOE games here.

Code Indigo Fred Hicks ran an online game of MCB. You can read and comment on it the Code Indigo community here.

A review of Mutant City Blues from RPG.net.

A review of Mutant City Blues from Flames Rising. 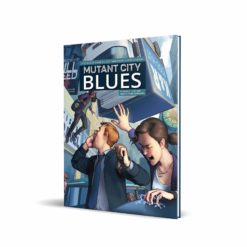 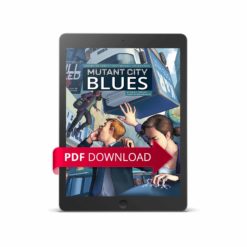 Add to cart
This site uses cookies to offer you a better browsing experience. By browsing this website, you agree to our use of cookies.
More info Accept