“Before that there had been wild enough stories — accounts of mysterious trips to Thibet, the African interior, the Arabian desert, the Amazon valley, Alaska, and certain little-known islands of the South Pacific…”
— H. P. Lovecraft, “The Horror in the Museum”

Bon voyage! You are about to depart on ten journeys into the unknown, following the trail of Cthulhu to isolated Pacific islands, into the icy wastes of the Arctic, through jungles and war zones and even off the Earth itself. In the blank spaces of the map, dark deities flourish and evil festers… but the truth waits to be discovered, secret knowledge that man may not be meant to know but that Miskatonic University covets. Into that mystery your Investigators go, armed with gun and camera and notebook, risking their own survival to keep those blank spaces from swallowing up the world.

Hurry on board — the gangplank is going up!

The Mythos Expeditions are a collection of adventures for Trail of Cthulhu, designed to be run as a stand alone with new rules tailored for expeditions or as part of the Armitage Files campaign setting in the core rules. Take your Investigators on an expedition into the dense jungles of central Africa, trek through the arid wastes of the Gobi desert, and clamber through the lost cities of South America. Your travels will you take you through the skies and across the oceans, into the lava caves of Papua New Guinea and the frozen peaks of Patagonia.

Written by Kenneth Hite and Robin D. Laws, with contributions from an eclectic mix of mythos experts, it includes the following expeditions:

The Dwellers in the Dunes – Steven S. Long

Famed explorer Roy Chapman Andrews leads one final expedition into the harsh Gobi Desert of Mongolia in search of fossils. His true hope is to find evidence that humanity evolved in Central Asia as his academic mentor predicted years ago. When his latest expedition uncovers some hominid fossils, he and his colleagues are ecstatic — until members of the expedition start dying horribly. Can the Investigators figure out what’s going on and destroy or escape a menace out of time before they and the rest of the expedition become yet another collection of bones scattered across the desert?

Professor H. C. Kelston of the London School of Hygiene and Tropical Medicine both loves and hates anopheles mosquitoes. Every day he wakes up thinking about the damnable creatures, so perfectly designed by evolution for fecundity. Kelston seeks a better way to end the disease’s reign of terror—by learning to control, and eventually exterminate, the mosquito itself. After expeditions to Egypt, Panama, and Greece, Kelston now trains his angry scientific eye on the British colony of North Rhodesia, in whose Busanga Swamp is said to fester the Mother of Mosquitoes. The investigators prepare to join him on that quest.

Lost on a Sea of Dreams – Adam Gauntlett

The group, en route to Bermuda with a bathysphere to assist naturalist and oceanographer William Beebe, is blown off course. The captain is injured in the storm, and few others aboard know much about navigation. Moreover what little they do know seems contradicted by the stars; none of the constellations are in the right place. How will the expedition get back on course?

An Incident at the Border – Kenneth Hite

On August 13 of 193-, during the Perseid meteor shower, something struck the Earth somewhere in the remote reaches of the Gran Chaco, a disputed and inhospitable borderland between Bolivia and Paraguay. Now, it’s late September, and the University has asked the Investigators to assist with a scratch expedition to find the impact site, make a full report of the incident, and recover any extraterrestrial material there, if any.

Professor Henry Rutherford Stapleton of the Miskatonic Department of Anthropology is just west of Chichen Itza, working with local Maya people and a few university students at what he calls the Cenote of El-Thar. He is loath to leave his work behind as he has fostered a relationship with the locals and reports he is on the verge of making a very important discovery. To the northwest, ethnolinguist Galina Avenirovna Prokhorov is studying glyphs found in the Temple of the Jaguar King, suggesting it has some connection with the cenote Stapleton is studying. Hurricane season is drawing to a close and Stapleton has requested several more students to aid him in investigating and dredging the cenotes, ruins, and vibrant villages on the Yucatan peninsula. The investigators are members of a Miskatonic University expedition whose purpose is to travel to a Christian settlement in India which some evidence suggests dates as far back as the 1st century AD. Their destination is the village of Usmavasati, which lies in the Siwali Hills on the edge of the Punjab region of northwestern India. Their aim is to advance historical knowledge of early Christianity, as well as possibly locate the source of a Prester John legend.

You can hear the audio of an actual play excerpted from “Tongued with Fire” here.

Langdon Gibson, a marksman and ornithologist, died six days ago on his acreage in the Catskills. It was an attack of some kind, quite bloody. Another man, Frederick Cook, also died gruesomely, in Danbury, Connecticut some months ago. Gibson and Cook had a common link, in that both been involved in the Arctic expeditions of the famous explorer Robert Peary, who mounted a number of expeditions to explore Greenland and the North Pole. Is this a coincidence, or did something unspeakable happen in the polar ice?

Dr. Tyler Freeborn at Miskatonic University has acquired a strangely carved whistle taken from Stone Age tribes in the New Guinea jungle. He has persuaded Dr. Armitage and the Derby Foundation to fund a small expedition to find the source of the whistle. They will journey to New Britain, Papua New Guinea, provision and hire guides, then venture into the unmapped rainforest to find the tribe who carved the whistle.

A Load of Blarney – Lauren Roy

On December 11, 1937, the steamship Annagher sank off the coast of Ballymacormick, Ireland. The Court investigation attributed the sinking to “a movement which was rendered inevitable by the peculiar quality of the cargo and its distribution.” The wreck report also expressed puzzlement that, although the time between intial list and capsizing was quick, the crew should have had ample time to make use of the Annagher’s lifeboats, lifejackets, and lifebuoys, and yet did not. Nine of the ten-member crew died in the wreck. In the early spring of 1938, a lump of iron recovered from the hold is sent to Miskatonic University for examination. Where the salvage crew saw nothing but scrap iron, steel, and lead, a scholar at Dublin’s Trinity College thinks she might have stumbled onto something unusual. She has sent it to Dr. Armitage for study, and has invited a team to cross the Atlantic and accompany her as she ventures into the graves of the kings and queens of Erin.

Tuesday July 17th 1934. Present Franklin D. Roosevelt, on a 12,000 mile voyage from the Caribbean to Portland, Oregon, arrives at Clipperton Island. Four years later, in the summer of 1938, the President is organising a return to the island as part of a 6,000-mile cruise examining various islands known for their curious wildlife, including the Galapagos. As the short-list of candidates is prepared, the Miskatonic decides to organise an expedition of its own to Clipperton Island. With the journey taking a week from the southern tip of Baja California, they will have a week on the island before they have to head back to civilisation before they make their report. Upon an island with a dark past, of which humanity knows so very little, a week can seem a very long time indeed…

The Mythos Expeditions are a collection of adventures for Trail of Cthulhu, designed to be run as a stand alone with new rules tailored for expeditions or as part of the Armitage Files campaign setting in the core rules. Take your Investigators on an expedition into the dense jungles of central Africa, trek through the arid wastes of the Gobi desert, and clamber through the lost cities of South America. Your travels will you take you through the skies and across the oceans, into the lava caves of Papua New Guinea and the frozen peaks of Patagonia. 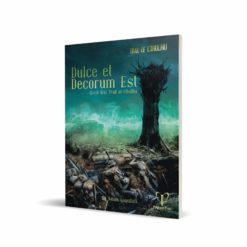