Footsteps 5: And Thence to Almery

AND THENCE TO ALMERY (Footsteps of Fools: Part 5)

This publication follows on from Beyond the Mountains of Magnatz and is the final in the epic ‘In the Footsteps of Fools…’ series.

Stranded in the desolate barren reaches of the upper Scamander, all seems lost until a peculiar band of pilgrims and their raft are discovered.

After the perils of the mighty river, and colorful escapades at diverse unique small settlements, the PCs may with luck & skill arrive alive at decaying & decadent Erze Damath: the mysterious city of the Black Obelisk.

Numerous hazardous adventures fill the weeks, whilst PCs determinedly seek the means to safely cross the vast & desolate barrens that now are all that remains between them and ‘home’.

Eventually reaching squalid & pompous Old Romarth, they seek out a set of legendary allies, with whose aid they hopefully arrive at Azenomei. If so they can confront their arch-nemesis – Iucounu the Laughing Magician – in a twisted & desperate battle of wits & magic around the echoing corridors of Pergolo.

This could be run as a stand-alone adventure, but is intended as the finale in the Footsteps of Fools adventure arc. Using it separately would mean that you couldn’t ever run the whole series for the same players. (The bare minimum recommended for running this series are: ‘All’s Fair At Azenomei’, ‘Strangers in Saskervoy’ & ‘And Thence to Almery’.)

And Thence to Almery comes complete with detailed maps (including Pergolo the daunting manse of Iucounu), pages of tag-lines, and multiple options & suggestions as to how to run the showdown with Iucounu as a grand confrontation to end all grand confrontations!

Essential adjuncts to running the later chapters of this work are the free Guides to Old Romarth and to Azenomei.

You will also need Turjan’s Tome if you want to avoid massive re-invention of standard items and spells that are heavily referenced here, especially in their dealings with Iucounu. Finally, this publication has an appendix of adaptation notes that allow you to easily incorporate the Turjan-Level adventure-book Fields of Silver as a grand finale to the Erze Damath chapters.

The final episode in the picaresque Footsteps of Fools series of adventures for the Dying Earth RPG, featuring the evolving exploits of advancing Cugel-level characters. 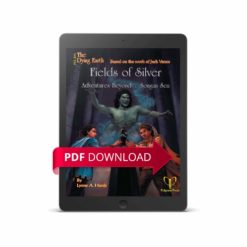 Footsteps 0: Day of the Quelo