This could be run as a stand-alone adventure, but is intended as the second in the Footsteps of Fools epic adventure arc. Running it separately would mean that you couldn’t run the whole series for the same players.
[A detailed Guide to Saskervoy Town is available for free here, and is an invaluable adjunct to this publication. Plus a map of the Saskervoy Reach is also available for free]
It is not essential to own Turjan’s Tome in order to run the adventures in this publication, though it would be helpful. Turjan’s Tome comes into it’s own later in the series, where lack of it would mean considerable extra work. The Excellent Prismatic Spray 4 and 5 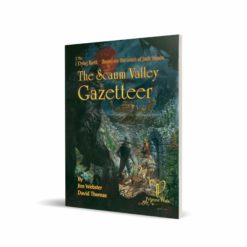