At Gen Con, brave questioners heard details on up to three unannounced projects. Over the last weeks, I’ve been making those revelations here.

The second: Ken and Robin Talk About Stuff

Now the third and final reveal: my new rules engine, DramaSystem, as expressed by its first game iteration, Hillfolk. The tagline for the project is: If Hamlet’s Hit Points is the theory, DramaSystem is the practice.

Specifically, it picks up on the HHP observation that the core scenes of any narrative can be broken down into two categories: procedural and dramatic, and that RPGs have traditionally excelled at the former and given short shrift to the latter. You know those magical sessions where the rules melt away and you just find yourself freely interacting for four hours? And next week you can’t recapture whatever lightning found its way into the bottle? DramaSystem makes the free-flowing story-making happen as a matter of course. It changes the roleplaying dynamic, allowing you to create ongoing collaborative stories that unfold like serialized drama shows (“The Sopranos”, “Six Feet Under”, “Shameless.”) I’ve been in-house testing this for most of the year and am beyond excited by the results.

The first game is Hillfolk, in which you play the core members of a clan of uplands raiders at the dawn of the iron age. Their personal stories play out in a crucible of competing civilizations. Do their histories change the world forever?

Pelgrane Press will be publishing; I’ll be talking about it in stages in the weeks and months ahead. For the moment, here’s a peek at the character sheet. This is my playtest rough and has yet to undergo graphic design beautification. But you get the idea. 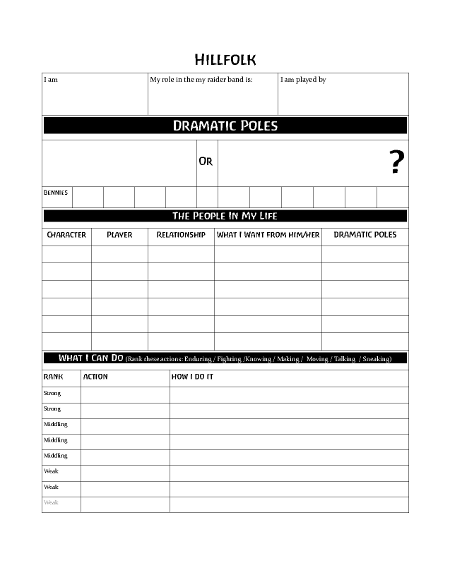