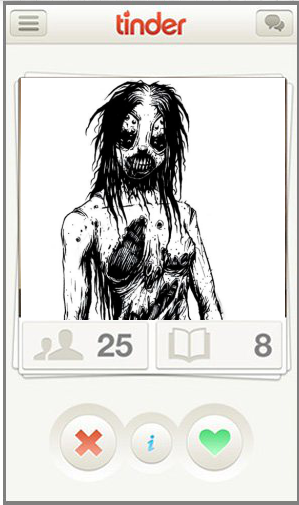 As students of The Book of Unremitting Horror know, Sisterites are beings from the Outer Dark who prey on lonely and isolated men desperate for contact with the opposite sex. Case files from that volume include a transcript of an IRC chat between a Sisterite and its doomed target. In the years since the Ordo Veritatis came into possession of that intercept, the entities have adapted to changing social interaction technologies. First they infiltrated dating sites, from OKCupid to Christian Mingle. The latter has proven a particularly fruitful hunting ground, with a user base that might charitably be described as skewing toward the trusting, or lacking in street smarts.

More recently the Sisterites have taken to mobile apps, most notably Tinder. The ease of its mechanism, in which one swipes photos of prospective dates left, to dismiss them, or right, to indicate interest, allows the extradimensional demons to rapidly zero in on their preferred victims. What used to take weeks or months of chat exploration can now unfold in a matter of hours, from first approach to torture, evisceration, and consumption.

Through its SIGINT capabilities the Ordo has been able to study the mobile app activity of several Sisterites. Given a wider field of choice, Sisterites choose victims fitting the following profile:

Given this information the Ordo has initiated sting operations in several major metropolitan centers, creating profiles that fit these criteria, in order to entrap, confront and destroy Sisterites.

Unfortunately the explosion in dating apps seems to correlate to an increase in the creatures’ numbers. Even if successful, this project may represent only a holding action against an increasing horde culling alienated, socially challenged males.