Backstory: The local chapter of the Genetic Action Front has long been a lightning rod for tension between the city’s enhanced and unaltered communities. 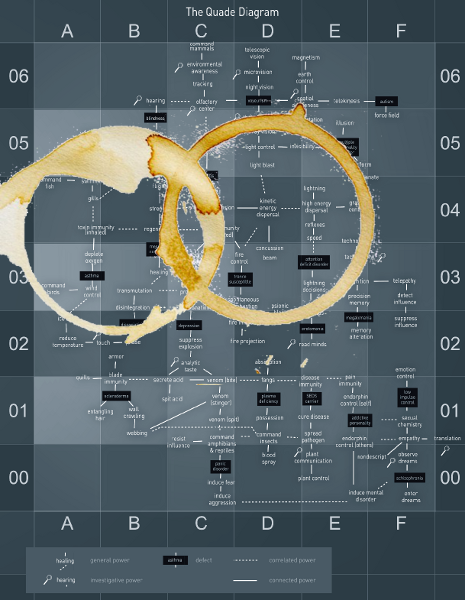 The Crime: When a recent recruit to the organization is found murdered in its offices, slumped over a photocopier, its enemies exult in the scandal. Detectives ID the vic as Brad Carpenter, a hothead who recently moved to the city after hellish bullying at his small-town high school. His enhancements included speed, reflexes, and lightning decision making. Carpenter showed signs of the attention deficit disorder typical of that confluence of powers on the Quade Diagram.

The Suspects: This seems like an open and shut case. Carpenter is found with puncture wounds in his throat, consistent with fangs, and died from a biological toxin, its effects bolstered by his speedster metabolism. The GAF’s sharp-elbowed second-in-command, Guadalupe Ramirez, has fangs and describes herself as also disease and pain immune. Bite venom is adjacent to fangs on the Quade Diagram, so she could easily have that, too.

The Twist: After the detectives win her over, Ramirez makes a shameful confession: she isn’t enhanced at all. She identifies with the movement, and is sure she will any day now manifest latent powers. But the fangs she wears are cosmetic, and although she has a strong constitution she isn’t actually immune to disease. Nor does she resist pain much better than the average person. Guadalupe begs them not to reveal the truth: it will ruin her career and worse, cost her all her friendships. Renewed testing shows that the killing was actually performed by mundane means intended to ape a murder using Ramirez’s supposed powers.

The Culprit: Is it Lance Mullins, who bullied Carpenter at school and then himself mutated, blaming his classmate for infecting him? Ramirez’s wife, Katrina Richards, who came to hate both her and the Genetic Action Front and sought to extravagantly punish a recent affair? Or anti-mutant bigot Denis Price, who decided to kill one enemy and frame another? Only the dedicated detectives of the Heightened Crimes Investigation Unit can close the case.