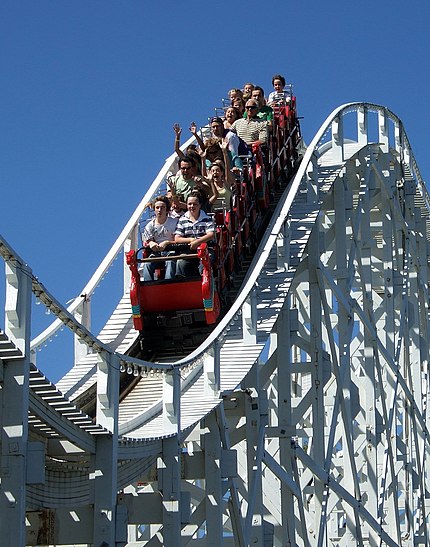 Gen Con stretches across the publishing year like a huge rollercoaster. In the first half of the year there is the slow, ratcheted climb to the peak. You can do what the hell you want in your carriage, you might even forget you are committed, but nothing it stopping the ride.  As you get higher and higher, you realise there is no turning back, and then we hold on for dear life as we plunge into a six-day adrenalin rush of travel, setting up, waiting, drinking, not sleeping, snatching food, snatching conversations and selling books like tomorrows are in short supply. We greet gamers we see once a year, new gamers enthused by our GM teams and sceptical gamers drawn in by the evil of the 4 for 3 convention deal. Hands are rubbed together, pitches honed and polished, and book piles refreshed.

On Monday, while the North American contingent were facebooking pictures of barbecue, we Europeans were scrabbling to find another way to get to Indy when the madness of Orlando’s security and no guidance held us up for an hour and a half. Thanks to the lovely Sabrina from Delta we did get there at an unholy hour, greeted by writers with bourbon in hand. This year, we tried something different – an all day Tuesday pre-Gen Con summit for the core Pelgrane team, followed by delicious Eritrean food . We set out what we were creating this year, and into next. We discussed the benefits and pitfalls of crowd funding, how we can improve our marketing, be kinder to our artists and what we can do for our most loyal customers. We need to hone the agenda, but it’s certainly worth doing again next year. This was a very gentle bump in the Gen Con rollercoaster. Wednesday is set up. This year, for the first time I can remember, everything we ordered arrived including Fear Itself 2nd Edition, TimeWatch and a new print run of Night’s Black Agents. It did make me wonder about an alternate timeline in which we didn’t get the TimeWatch books to the backers, but the thought was too horrid. We still haven’t quite got our booth act together – it’s just piles of books on tables, scaled up from the first 10′ x 10′ booth Robin Laws and I stood behind more than ten years ago, but it works.

Then it was our GM huddle. We used to do no official events but over the past three years, it’s grown from nothing to 150, and we now have official games which have moved from hotel wilderness to with a five-minute walk of the stand. The GMs waited very patiently while we assembled their GM packages, entertained by the game designers who created the games they were playing – Rob Heinsoo, Robin Laws, Gareth Ryder-Hanrahan and Ken Hite, and by an impromptu quiz from Robin which featured pudding. I met many of our GMs, including the  Heavy Metal GM, Sean Clark. We gave out Pelgroats – $1 tokens for players and we later learned from our data, that the GMs were responsible for selling a whole bunch of core books. We are all about people playing the games we publish, so this made us very happy. Wednesday night is that Diana Jones awards, where pretty much the entire industry gathers to catch up and talk over the poor compère.

On Thursday the ride is really under way. The hall was way bigger this year, and it was laid out so that it’s no longer possible to walk it, and there 60,000 people. We’d been shifted by the growing Paizo purple checkerboard from booth 101 to 419 – still a great position – next to Chaosium and Goodman Games. Then there are meetings. We meet excited freelancers we’ve been working with all year, licensees who tell us how their gaming culture differs, distributor reps who are desperate to sell RPGs in a retail landscape which does not favour them, and a box manufacturer who made the best and most joyful pitch we’ve seen. Hands were shaken, deals done. I brought home a Chinese version of Trail of Cthulhu – to be honest, the way IP works in China, we were lucky someone was willing to pay.

Awards. Dare I mention we won some on Friday? Ten nominations, eleven ENnies. A smug Kevin Kulp, presenter of the ENnies and writer of TimeWatch,  knew exactly what was going on remained entirely poker-faced until he didn’t have to be. The Dracula Dossier team were up and down five times, 13th Age and Trail of Cthulhu got nods. But our proudest award by far was Fan Favorite Publisher. So many publishers are listed under that category, we’ve never even counted it is as a nomination, but there we are, winning a silver to Paizo’s gold. We were overwhelmed with happiness and amazement at the loyalty and commitment of our fans. Saturday and Sunday are a banked turn and a barrel roll on the rollercoaster ride. Some of our lines ran low, but we brought so much stock this year  we didn’t run out of books other than the new Swords vs Cthulhu. At the end of the each day we are allowed to run the numbers. Overall, sales were up 15% on last year. Only 2013 – the launch of 13th Age – has been better.

Then we broke down the stand, sang the company song, ate our traditional end-of-Gen Con meal,  collapsed and decompressed. Gareth Ryder-Hanrahan fell over and bashed his nose on the steps of our hotel, poor thing, but was able to travel, and we flew back again, avoiding the Delta Disaster, and we all slept, for once, on the plane. The rollercoaster rattles to a halt.

Now we are catching up on all the work we generated, and queuing up for next year’s ride.