This month for me featured online games – a playtest of a Yellow King RPG adventure, new releases from virtual tabletop providers, and Steve Dempsey ran his 60th Fearful Symmetries session. It’s not quite the same as playing in person, but I find that aside from the convenience of online play, players spend more time actually playing than in the flesh. I am still too much of a fearful Luddite to run an online game myself, but that day will come. This month we are attending the Origins Game Fair, where will will be showcasing The Fall of DELTA GREEN to convention goers. I love Origins because of its more relaxed opening hours, and its more modest size allows us to connect with our fellow industry professionals and gamers much better. That, and Cthulhu Confidental has been nominated for an Origins Award for Roleplaying!

This month’s new releases and pre-orders include, for 13th Age, The Book of Ages, the 13th Age Dice Tray, Book of Demons and The Battle Scenes Complete Bundle. The Fall of DELTA GREEN has been landing with Kickstarter backers in the States, and will soon be shipped to the Rest of the World, so if you want to be included in the first wave of pre-orders, now is the time to order from the store.

A few brave Kickstarter backers now have their copies of our blockbuster GUMSHOE release. I am unable to restrain myself from repeating what Delta Green co-creator John Scott Tynes emailed us. It’s unsolicited, I swear.

I received my copy of Fall of Delta Green today and it’s marvelous. Even setting aside its obvious utility as an improvised cudgel, it is an inspiring and engaging tome that meets and exceeds the standards we have always tried to achieve with Delta Green. Thank you for devoting such time and passion to exploring and expanding our shared world and for introducing a new generation of gamers to such a rich and turbulent historical period. Great work, all of you, and please accept my very best wishes for the project’s success.

Ken Hite has a copy in a his squamous hands, and he sent an image of his favourite spread: 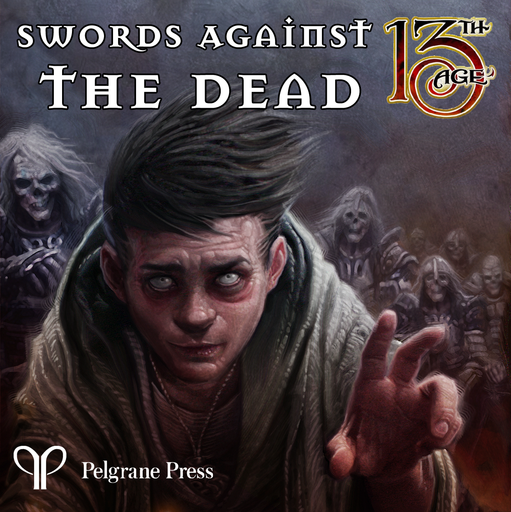 The two major virtual tabletop platforms now feature 13th Age content, so you can play online with your friends. Aside from an online character sheet, Roll20 has three adventures available including the newly released Swords Against the Dead.

Fantasy Grounds has released the 13th Age ruleset and the 13th Age Bestiary allowing you to create and run your own adventures on that platform.

The GUMSHOE Bundles of Holding

Over on Bundle of Holding, they are running two GUMSHOE bundles – collections of our PDFs at a modest price. It’s an effective way to introduce yourself to our GUMSHOE lines or with the second,bundlem fill out your collections. We’ll add the PDFs to your bookshelf when the bundles are complete. Those of you with DriveThruRPG accounts can find them there, too.

The Yellow King RPG and its associated books are moving along nicely. I had the pleasure of being involved in a an online game in which Robin Laws ran the game he wrote for this year’s Gen Con GMs. Colleen and Cat were my co-students in Belle Epoque Paris, where we tracked down a copy of the forbidden play by following the destruction it left in the wake of its passage. The last time I experienced the game was in an early playtest Robin ran at Dragonmeet, and it was interesting to contrast this final, polished experience. The conflict resolution allows players to select their intended outcomes, and then each makes a test to meet a margin of difficulty. So, you can choose to flee, to restrain or to kill. With creatures from Carcosa, fleeing is a good option unless you are thoroughly prepared. The players in turn narrate the outcome of their roll, and the GM summarises the outcome. The level of detail in conflict narration was just right, and felt satisfying. The system (like Cthulhu Confidential) also uses pushes instead of spends – so instead of spending points from Investigative pools, you have a list of Investigative abilities, and a number of pushes you can use with any of those abilities. I don’t think it would be a great deal of work to convert any GUMSHOE game to using this approach, which I’ve found sits better with people used to Fate tokens and similar mechanics. It’s still possible to snag Yellow King kickstarter packages from the store. You can see almost all of our forthcoming products on this tag.

On 25th May 2018 the European Union General Data Protection Regulations came into force. They are designed to ensure that companies respect the wishes of their customers and other contacts when it comes to privacy and communication, and express their policy in clear language. All of us have received a plethora of emails informing us of updated privacy policies, offers to re-opt in to mail lists, or statements that you will remain opted in unless you opt out. It’s been a bit of a headache for some companies, but my own view it’s quite healthy. It doesn’t just protect company’s contacts. it encourages good data hygiene by companies, and makes them consider why they need certain information.

Where companies have been compliant with GDPR rules before it was introduced, there was no need for them to contact their customers. We are in that fortunate position. There were a handful of members on our mail list who were not customers, but subscribers acquired over many years, and because we were doubtful of their provenance, we contacted them so they could opt back in if they want. I’ll unsubscribe those would didn’t respond.

We make use of what is called the “soft opt-in” which allows companies to contact their customers with information about their products, as long as they give a simple way of opting out.

You can control your marketing options from your bookshelf, or opt out of all emails in single click from any email we send, and our privacy settings are here.

Aside from our legal responsibilities, the best measure to me of whether we are bugging our customers too much are the unsubscribe rate, open rates and abuse reports. Abuse reports are close to zero, and unsubscribes less than 0.25% and about 40% of those we email open our Page XX emails on average. I am quite happy with that.