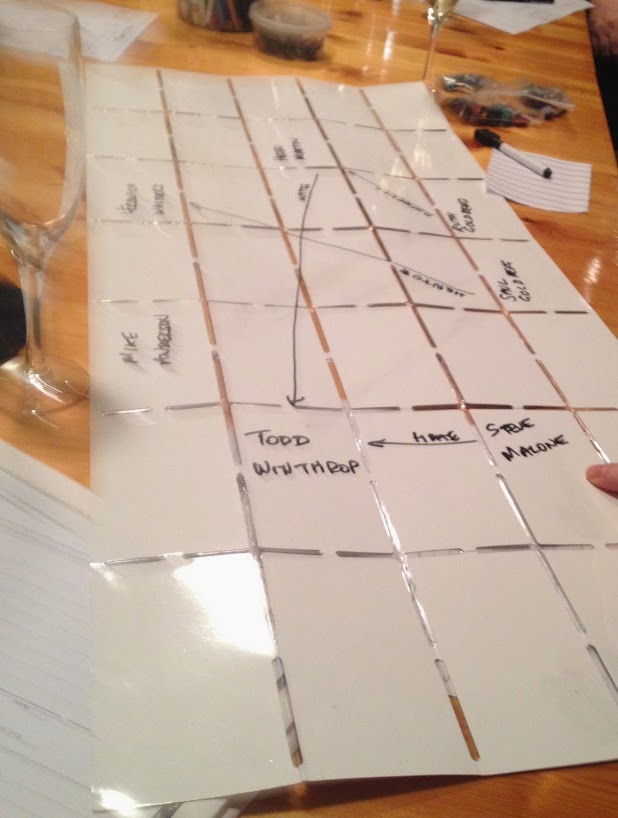 I designed DramaSystem to allow groups to impose their own dynamic on play. It gives you a framework and lets you decide what to do with it. So when it turns out that one-shot games tend to take on a cutthroat edge, that’s not because I installed structures to make that happen. In fact, I pulled back from a structure that encouraged that, when I moved from suggesting that a single session game move toward a definite resolution to a preference for a game that feels like the first episode of a serialized drama. I used to recommend that PCs be able to kill each other in the final round of single session play, as you might expect at the end of a Fiasco or Skulduggery game. Allowing that forces the group into a PVP mold and distorts what DramaSystem feels like when you run it in the ongoing format it’s tuned for.

When a more openly PVP feel emerges, it happens because that’s what’s natural and organic to that group that night, not because a clock ticks steadily to a kill-or-be-killed end-state.

Not all groups gravitate toward this. Demo groups encountering the rules for the first time tend to be more cautious as they orient themselves to the system. Conveniently, this feels more like the first episode of an ongoing game than a quickly escalating one-shot, suiting demo purposes perfectly.

In an ongoing game you naturally pace out your character’s emotional arc to give lots of room for growth over the course of many episodes, rather than quickly transforming over the course of a few scenes. You change your relationships with other cast members incrementally, not through successive emotional leapfrogs. Big betrayals don’t happen right away, because you’re reluctant to burn your bridges with characters you’ll be interacting with for a long time.

If as a GM you want your one-shot to feel more like a pilot episode, look for a Series Pitch that dials back the external stakes. Seek out premises where the characters aren’t arrayed in a power structure. If there’s a king, or a chieftain, or a chief of station, a one-shot left to its devices defaults toward a struggle to displace him. Tighten the focus of the main cast to make them all peers. To play with themes of power without going cutthroat, establish a NPC as the authority figure, and give the players something to do other than scheme to get rid of him. Call the first scene to give the group an external threat to cooperate against.

On the other hand, cutthroat play may be exactly what the group wants. A group that only gets together intermittently but knows each other well enough to enjoy putting each other into tight spots will have a blast with a pitch that lets them gleefully go at it.

You may have an idea ahead of time whether a DramaSystem one-shot will go cutthroat. If so, you can take some measures to increase your chance of coming out on top during the final round.

(Assuming that triumph is even your objective—it can be at least as much fun to spectacularly flame out as the tragic or comic center of attention.)

If you start out as the cast’s heavy hitter, you’ve got nowhere to go but down. Well, there’s down and then back up again, if you want to aim for a bankshot. But in general if the game is king of the hill, start off some distance from the slope. In a cutthroat game a little misdirection always helps. Express your desire in a way that doesn’t obviously require you to sweep the table to get it. A desire like Power, classic though it is, establishes your character as a threat. Alternate expressions like Respect, Order, or Safety might also give you a reason to pursue a victory over the other cast members without clanging an alarm bell to that effect.

Just as in a LARP or game of Diplomacy, gathering allies in the early going serves you well in cutthroat DramaSystem. Offer resistance to other PCs at the top of a scene, make them work to petition you, but then relent. By making petitioners feel that they overcame real reluctance, they’ll declare that they got what they wanted—giving you the drama token you seek.

Be ready to sacrifice a drama token or two early on by digging in your heels on a petition or two. A big lead in drama tokens marks you out as a potential threat. Seeming non-threatening goes only so far as you amass a big pile of them for all to see. In an episode of an ongoing game, players may hoard tokens for conversion to bennies, or simply for bragging rights. In a single session game, especially if it takes on a free-for-all cast, everyone expects a fat token pile to turn into a big spending spree at the end.

An early force might sound like a sure way to paint yourself as a target, but it also reduces your token pile. If you seem like you’ve shot your bolt, you take the heat off, allowing you to advance your chosen victory conditions under the radar. Naturally, when another player builds a big token pile, a little carefully executed table talk can set her up as the threat, and yourself as a defender to rally behind.

Finally, you might discover that the rest of the group intends a more internal drama, and that your groundwork for backstabbing doesn’t fit the overall direction. Embrace the challenge of setting aside your plans, which never last long in DramaSystem, and find a way to support the story as it heads into another space.