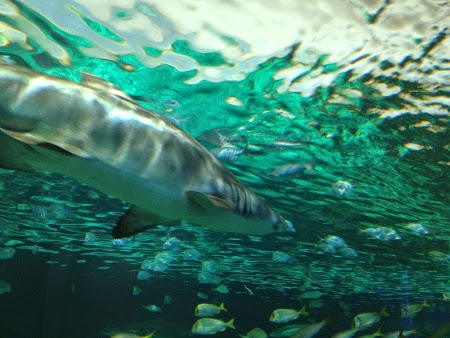 We found the shark man washed up on the shore, north of the spot where the Old Wall reaches the sea. The others, eager as always to declare themselves free from the constraints of mercy, would not aid him. I gave him a share of my meager catch and went hungry myself. He ate sparingly; a few hours later he rallied enough to speak. Cursed as I am to question and chronicle, I asked him of life beneath the waves. These are the words, as I marked them down.

“Though I thank you for the food, you should know that I am dreaming now. This waterless surface world, though you might believe it to be real, is but a place we go in nightmares, when the waters grow turbid and sleep eludes us.”

Surely this could not be true, I told him. The might of our 13 icons surely intrudes below the waves, undeniably affecting the lives of air- and water-breathers alike. Yet deny it the shark-man did:

“Your supposed icons are but strange reflections of the 13 true icons, who rule the lightless depths,” he said.

“First among them is the Shark Mother, queen and progenitor of my people, who keeps the waves safe for our hunting and slakes our ceaseless hunger.

“Our greatest enemy is the Lizard King, potentate of the accursed reptile men, who dare to compete with us for cruelty.

“Others, like the Colony, neither oppose our aims or force us to oppose them. The Colony rises from the ocean floor, a vast complex of colorful spires, always building and creating.

“The Vent sends lava and dust into the seas from its deepest trench. She keeps the demons from draining the waters of life-giving air.

“Her daughter, the restless Crab, scours the world for stray demons, yet eats many others in her compulsive quest to clean it all.

“Opposing her is the Shell-Borer and its many drilling minions, who pierce through shells and armor and seek to split the Vent for good.

“The Mermaid rules the sunken cities of men who once breathed air, but now swim with the tails of fishes. Her people fear us, though they are not so good to eat as they assume.

“Kelp Woman protects the vegetation, and the things that are neither plant nor animal. This is good, for without her bounty, the things we eat could not maintain their numbers.

“The Phantom imposes a semblance of order on the revenants of sunken sailors. Some of you dreamlings call him Davy Jones, though I don’t know why.

“Many-Arms waits for us to falter, so that his formless servitors may take our hunting grounds. We fear only the largest of them.

“The Collector fills a palace with the messages from the distant gods, imprinted on the surfaces and mottles of shells. In them he reads omens, from which his ever-changing doctrines grow.

“Sharpjaw aids the weak and darting creatures. Beneath his japes and jests lies deadly intent. Feel the currents and sense his presence.

“Of Leviathan I will not speak. To name him is to summon him, and his wrath is a mountain.”

My companions, who fate had rendered impecunious, chose to take the shark man inland in hopes of selling him to an Imperial official. A few days into the journey his skin dried out, and he piteously died.

Because I breathe air and not water, I have never managed to confirm the truth or fancy of his account. Yet chronicle I must.