a column on roleplaying

Looking for a new way to spark ideas for your next player character? Consider stealing a dramatic pole from classic literature.

As Hillfolk players know, a dramatic pole is the essential opposition that defines a character tuned for, you guessed it, dramatic storytelling. It allows the character to be pulled in two directions through the course of the story, fueling inner conflict.

Is Huckleberry Finn innocent, or corrupt?

Is Don Draper real, or an advertising image for a created self?

Is Rick Blaine of Casablanca selfish or altruistic?

You can usually define any classic character in a couple of ways. How you nail this down reveals your perspective on the work and the character. What matters is that you identify a key opposition that spurs the character to pursue emotional goals. This pursuit becomes the action of the story.

Shakespeare serves as a deep mine of classic internal oppositions. As a dramatist, he has to get his characters moving and into collision with one another.

Is Hamlet a man of action, or a man of contemplation?

Is Lear a king or a fool?

Is Brutus an idealist or a betrayer?

Is Juliet a loyal daughter or a romantic lover?

Let’s take Caliban from The Tempest. You could define him in a couple of ways. Rebel vs. servant would work, for example. 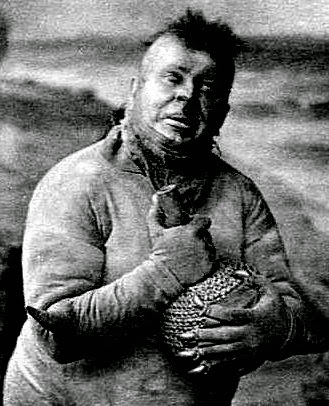 For this article, let’s pick another: man or monster. This one reverberates down through the story tradition. We see it again with Frankenstein’s monster, The Wolfman, and “Dexter.” A huge swathe of Marvel comics heroes use the man or monster opposition: the Hulk, the Thing, the Beast, Nightcrawler, and many more.

(To digress for a moment, if you want to sum up the difference between the Marvel and DC heroes, Stan Lee’s creations tend to have dramatic poles, whereas the earlier DC characters don’t so much. Spider-Man’s hero vs loser opposition takes center stage. Superman’s divided nature doesn’t get much play until much later revisionist takes like Man of Steel. The inherent wrongness of that film suggests that the character wasn’t built to support an internal opposition and can’t stand having one bolted onto it retrospect.)

The list above shows us that Caliban’s man or monster opposition serves as a rugged chassis for genre characters.

Most but by no means all genre characters appear in procedural stories, which are mostly about the overcoming of external obstacles. Very often the character appears in a serial format, undergoing multiple distinct adventures. This is the pattern that all traditional roleplaying games emulate.

As the Marvel examples show, serial characters who star in procedural stories can still use dramatic oppositions to hold our interest. However, if they’re to continue their adventures, the opposition can never truly resolve itself. Should Bruce Banner get cured, he becomes 100% man and 0% monster, but that means no more Hulk stories. That’s why experienced comics readers know that a new cure for Banner’s condition will never last very long. It’s just a temporary way of finding a fresh angle on man versus monster theme.

If you start with the idea of playing a man or monster PC, the task of adapting it to various genres falls readily into place.

In a fantasy game, you can literally be a monstrous being, whether an orc or minotaur, who aspires to acceptance and a higher self. If you’re playing 13th Age, you could select icon relationships that heighten the opposition. A fraught relationship with the Lich King, Orc Lord, Diabolist or Three could represent your monster side, even as you aspire to a greater connection to the Emperor, Elf Queen, or Priestess.

Science fiction dramatic poles often center around the nature of humanity. Your monstrous side might be represented as a grotesque or brutish alien morphology, or as extensive cybernetic implants.

Some horror games might permit you to have a bit of monster in you already as you start play. In Trail of Cthulhu, give yourself the drive “In the Blood” and you’re off to the Innsmouth races.

To use the opposition in Mutant City Blues, select mutant powers that make you look freakish, and make sure your powers grant you a defect allowing the question of your slow mental or physical deterioration to drive personal subplots.

When a setting doesn’t allow for literal monstrosity, you can always go for the metaphorical kind. As a cursory glance at history tells us, the real monsters out there are all people. To go back to Shakepeare, his portrayal of Richard III could easily be classified as having a man/monster opposition. (Like pretty well all of the history plays you could also give him just ruler vs. tyrant, but since that fits them all it fails the specificity test of great storytelling choices.)

Your ultra-competent agent in The Esoterrorists could have passed Ordo Veritatis psych evaluation by cleverly hiding her psychopathic nature. She starts out as a sociopath for the forces of good, just like 007 in his classic conception. But what happens when her Stability starts to slide below 0?

Any opposition you can find in literature can work in DramaSystem. The settings described in the various series pitches merely dictate whether the monster side of you is literal or metaphorical.

So for the core Hillfolk setting, as well as other non-fantastical pitches like “Brigades”, “Maroons” and “The White Dog Runs at Night” reality as we know it restricts you to the limits of human deformity. You might give your character a curved spine, paralyzed hand or missing eye in order to underline the monstrous side of his dramatic pole. Or you might find the way it associates disability with monstrosity unnecessarily stigmatizing and decide to chuck this longstanding literary trope into the dustbin. In that case you’ll make your character monstrous by action but not by outward appearance.

Other DramaSystem series pitches draw on genre elements allowing literal monstrosity. Your “Alma Mater Magica” or “Under Hallowed Hills” character could be half human, half goblin. A mecha pilot from “Article 9” could be infected with an advanced case of ATI (anime tentacle ichor.) In “Against Hali” you could be emotionally warped by exposure to the banned play, The King in Yellow. “Transcend”, with its theme of extreme futuristic body modification, revolves around this opposition. If you’re the central character, you might not see yourself as part monster, but family members run by the other players might.

Likewise you can take any of the other oppositions mentioned here and use them as a springboard for your character. The intersection between pitch and opposition makes for a different character each time. Your choice of family vs. love leads you to create a quite different character in the Icelandic saga of “Blood on the Snow” than it would amid the smoky cross-cultural intrigue of “Shanghai 1930,” because the historical contexts are so different.