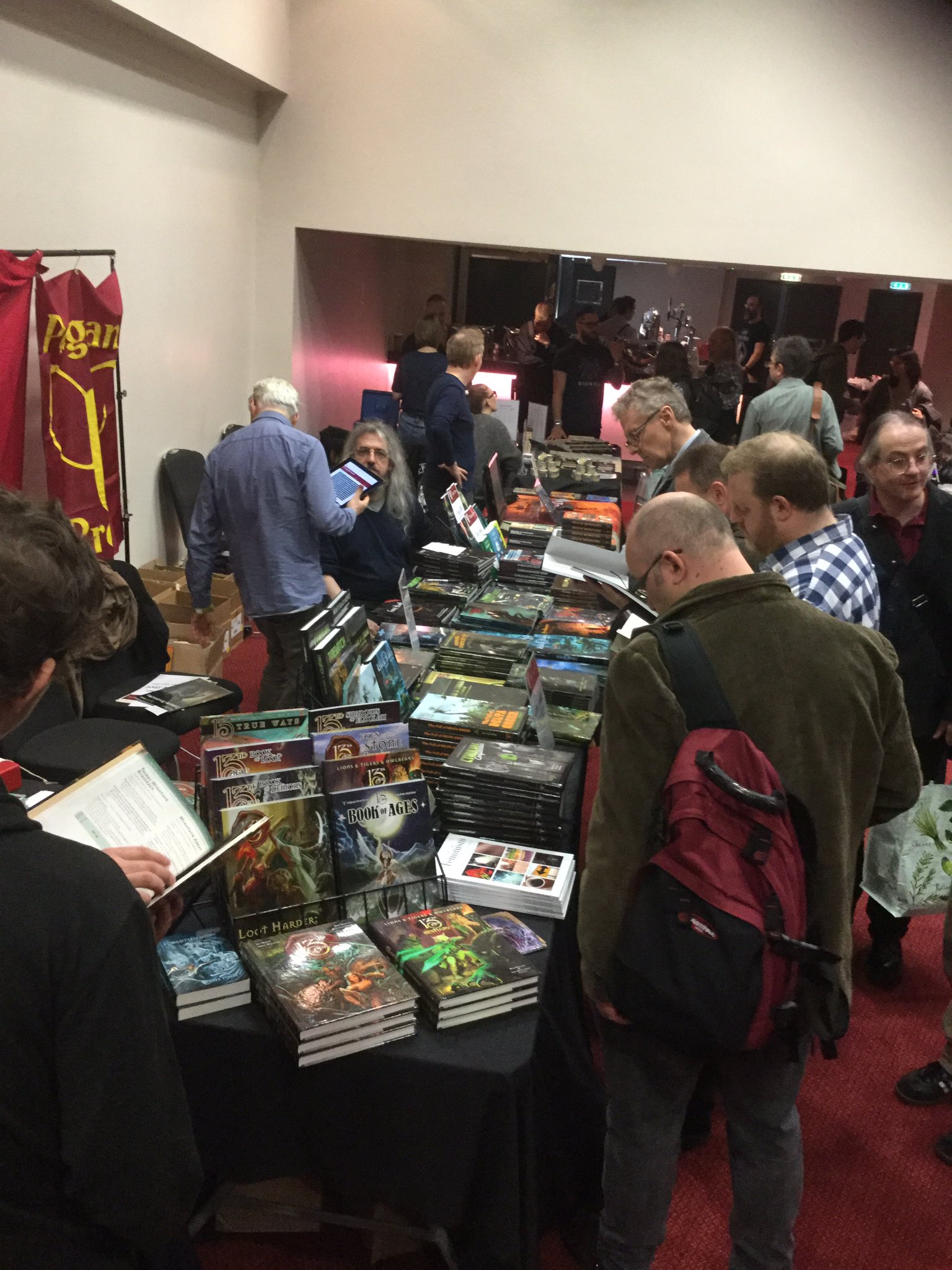 Pelgrane Press and ProFantasy Software been attending Dragonmeet since 2001. It’s changed venue, organisers, and increased in size over the years, and it’s become the UK’s premier one day table top game convention.Only Gen Con provides more sales in a single day, and it has by far the highest spend per attendee. As an exhibitor, especially one with home advantage, it’s a must. This year was an excellent year for sales, even with no new releases, though our efforts to display our entire range of books means a pretty cramped display. With the exception of the last couple of hours, the stand had a constant flow of visitors, and it’s always a great pleasure to catch up with our customers, reviewers and freelancers in person.

This year, we split the party. CEO Cat Tobin was at PAX Unplugged, which has a very different audience – not as well versed in RPGs, but keen and eager to acquire them. We sell core books at Dragonmeet – but PAX had a much greater proportion of such sales. Our convention 4 for 3 offer means that many UK gamers get their annual Pelgrane fix at the Dragonmeet stand, and as one customer said “Not so much 4 for 3, as 8 for 6!”

The other thing which makes Dragonmeet so special is that every year, I host a bunch of Pelgranistas and we talk shop, industry gossip, eat, drink play games and make merry. This year’s Friday game I had hoped for an escape from the current state of politics, but the mischievous Robin Laws ran a game set in the world of the Yellow King RPG, which was set on March 29th 2019 and featured a wicker man. You can already guess who the sacrifices were, and perhaps the name of the adventure. On Saturday, following Dragonmeet and a meal, we retired to the pub to commemorate Greg Stafford. Sunday was a day of rest, a greasy spoon, a short gathering at the venue, and then the annual Pelgrane summit. Cat, who is quite capable of expressing herself even on mute, looked on with what I think was great joy as we munched cake and drank Riesling, while she Skyped in from behind a hectic PAX Unplugged stand. Topics discussed included Robot Dreams (a new GUMSHOE setting), other forthcoming projects, the state of the industry and new roles within Pelgrane. Monday, Ken Hite takes his annual trip to Treadwell’s and Foyles to acquire esoteric research material for his game design. Today, an unscheduled extra, Robin and I lunched with artist John Kovalic who discussed Munchkin WH40K and Dork Tower plans.

I need a few days off to recover, I think.