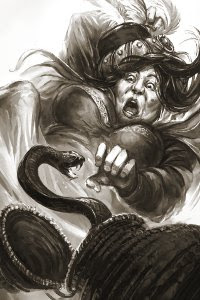 In DramaSystem, the group takes turns selecting themes for each episode. At the end of each session, players explain how they brought this theme into play, and related it to their Dramatic Poles, the internal contradictions that lend dramatic characters coherence and motivation.

Certain basic themes recur again and again—as well they should, since they represent the classic emotional conflicts that underlie all drama. Altruism vs. Selfishness. Loyalty. Betrayal. Vengeance. Star-crossed Love.

Hillfolk lists a number of these classic themes; when you’re the episode caller responsible for choosing the night’s theme, you can’t go wrong by simply picking the most appropriate item on the list. Assuming no one has beaten you to it…

The Series Pitches in both Hillfolk and Blood on the Snow all come with their own lists of suggested themes.

Scan an episode guide for any serialized drama and you’ll see that many of the episode titles can be appropriated wholesale for your use.

Not all episode titles work as themes. Set aside those that simply refer to the overt action of the episode, or mention specific characters or situations. Look instead for abstract episode titles, or ones that read like epigrams. Always pick titles that resonate emotionally. Unsurprisingly, dramatic shows like “The Sopranos” or “The Good Wife” tend to work better for this than procedurals like “Star Trek” or “Doctor Who.”

To start with a show high on gamer radar systems, let’s look at “Game of Thrones.” Episode titles that would also make great DramaSystem themes include:

You Win or You Die

Any of these could work for Hillfolk or nearly any other DramaSystem series. Even the arid southern badlands suffer when winter comes. You do face one problem with appropriating directly from “Game of Thrones”, though—it’s so imprinted in geek consciousness that the obviousness of the references may become too glaring.

Instead, you might step a little outside the fields of genre, to a show where players are less likely to have the episode titles committed to memory.

Red in the Face

For Those Who Think Young

A Night to Remember

Love Among the Ruins

The Sleep of Babies

Fruit for the Crows

Burnt and Purged Away

Certain TV shows adopt a standard theme for their episode titles. A group could easily do the same for a DramaSystem series.

“True Blood” uses song titles, which then play under the closing credits. Occasionally they’ll cheat a bit by commissioning a song titled after an element in the show, like the great Iggy Pop track “Let’s Boot and Rally.” Mostly titles derive from existing songs, which we hear either in classic versions or as a cover. (The show occasionally breaks from the formula, playing the title song as source music within the episode, but let’s not get bogged down in technicalities.)

Everybody Wants to Rule the World

When launching a new series, the group could agree on a similar theme. To stick with the song title idea, you might ask the group to pick songs that encapsulate the period. A series set in the late sixties might give you themes like:

So You Say You Want a Revolution

You Really Got Me

Tears of a Clown

The corpus of blues songs drips with the emotions that drive a great DramaSystem episode, letting you give your character’s dramatic opposition a fitting workout. Their folkloric imagery dovetails superbly with modern supernatural settings, like Jason L. Blair’s “Inhuman Desires.”

Hellhound on My Trail

The Sky is Crying

Empower yourself to nick song titles whether or not everyone has agreed to use them all the time. When you’re stumped for a theme on the way to game, grab your portable music device and scroll through your playlist until something lands with you as appropriate to the current narrative.

Shakespearean phrases have been plundered for titles for generations. You might make them a consistent theme in series like Dave Gross’ “Shakespeare VA” or Ed Greenwood’s Elizabethan faerie intriguer “Queen or Country.” Like song titles, they also function well as standalones. The main challenge you meet here is that so many of them have already been memorably stolen. Shakespearean references so pervade English idiom that you may be using one without even realizing it—”Sea Change,” anyone? “Foregone Conclusion?” “Salad Days?”

Hawk and a Handsaw

Too Much in the Sun

What’s In a Name?

Let Slip the Dogs of War

The most recondite recent use of the themed title in television is “Hannibal,” which names each episode for a high-end cooking technique. That might be a little ambitious for DramaSystem.

You don’t want to pick a reference so clever that everyone has trouble relating it to their Dramatic Poles during the post-session wrap-up. If the rest of the group looks at you blankly when you announce a theme, you’ve gone too far.

But with a little advance preparation, you’ll already have another brilliantly stolen idea on your list to immediately replace it with.