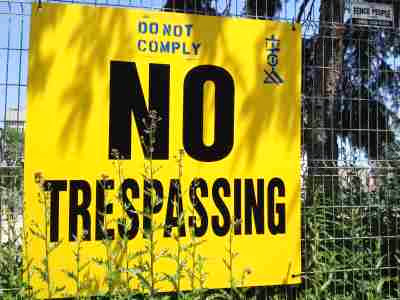 For a pivotal feature of the roleplaying experience, the ability of players to make choices that alter the course of events can be awfully easy to lose track of.

The way in which an adventure is devised and delivered tends to alter both the number of choices given to the players, and the impact of those choices.

In a purely improvised adventure, a collaborative GM can most easily respond to player initiative. She doesn’t have to envision a complex set of branching eventualities. When the party encounters a challenge, players tell her what they plan to do about it. They conference about this before arriving at a proposal, giving the GM time to imagine likely approaches and outcomes. Or she can sit there attending to some other bit of planning and respond with well-honed common sense to whatever the plan of action turns out to be. Through some combination of rules resolution and fiat, she works out whether the plan succeeds or fails. Then she narrates the consequences of that outcome. Bingo, the players have made a choice, seen a result of that choice, and now move on from that result to their next obstacle, where the pass/fail cycle repeats itself. Choices not made remain invisible, except to the extent that the players consider making them during the conference phase, but then don’t.

In a prepared adventure, and most particularly in an adventure written by a designer for another GM to run, the introduction and communication of choice points complicates itself.

When you prep an adventure for yourself, you’re probably leaving in room for adjustment and improvisation as you go. You likely don’t write it out in full prose, as a designer of a published adventure has to do. You only need enough notes to remind you of what had in mind ahead of time. Within the bullet points lies lots of room to improvise.

Published adventures have to spell out much more of the author’s intention. In this process the author can constrict his intention, limiting player choice—or force you to compensate on the fly when you hit a result that should have been accounted for. To compensate for this, adventures should explicitly include plenty of choice points and make it easy for GMs to spot and deploy them.

A couple of obstacles stand in the way of that, though.

One, it’s all too easy even for an experienced adventurer writer to slip into full-on narrative mode, describing what’s happening as if in a screenplay, rather than sticking to a blueprint for the GM so she can tell the story. Some of my earliest adventures fall into this trap. You might call this the distinction between story-mapping, in which you lay out choices for the GM to set out in front of the players, and storytelling, in which you present a vivid chain of events she somehow has to wrangle them into. Storytelling tempts the adventure writer because it is more fun to write and therefore to read. People who buy adventures to imagine running them, as opposed to actually running them, may enjoy a storytelling style more—it’s clearer and more exciting.

A story-mapping style, on the other hand, bursts with if-statements.

To test an adventure for choice points, see if it keeps using, along with a profusion of ifs, words like might, probably, possibly, perhaps and maybe. A story-mapped adventure has to lay out a variety of roads, most of which will not be taken, and their consequences. Then it has to make them easy to find during play.

Certain tricks can aid in this. If the main choice before the players is which scenes they involve themselves in, and in what order, the individual scenes don’t necessarily require a ton of if-statements that chain into other if-statements. On a macro level, GUMSHOE scenarios often work like this. It doesn’t mean much, though, unless the order in which scenes occur makes a difference to the overall outcome of the story, or introduces some other long-term effect into the series.

Zooming in further, a GUMSHOE investigative scene also poses the choice of where to look for clues, how to gather them, and, most importantly, how to put those clues together to either move forward toward the ultimate solution of the mystery.

Fight scenes offer an array of choices—perhaps too many if you like your scraps simple but the rules system doesn’t. As with the clues in an investigative game, these are baked into the structure of the rules set. The designer or GM drops the creature stats, terrain and situation into play, and the game’s basic dynamic takes care of the rest. When the fight starts, players decide who to engage, what to hit them with, and then how to change the situation to their benefit as the dust-up continues. That’s why they work so well and are such a staple of roleplaying, as we see gloriously celebrated in 13th Age. Fights offer an array of choices all bundled together outside a messy nest of if-statements.

It’s scenes between the extremes of mystery solving and head-bashing that require the greatest attention to bake in meaningful choices. These scenes include negotiation, politicking, and exploration, to name a few.

As pure text, even with bullet points, a scene consisting of possibilities and if-statements can prove hard to decipher. For a recent Pelgrane adventure I visually mapped a couple of particularly branchy scenes to bring the text into focus. This is not only clearer for the GM who has to untangle the thicket of choice points, but forces you as adventure designer to consider dangling options and ensure that the choices matter to the players.

This is a model any GM can follow when prepping a scene. When writing an adventure only for yourself, branching diagrams might largely replace text. That makes your adventure not only tighter and richer, but faster to notate. 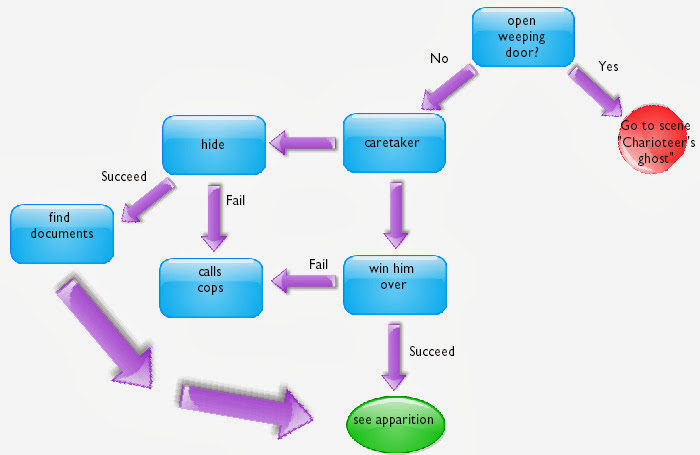 In this diagram, you’ve chosen to grant the most benefit to the risky move of hiding from the caretaker—if it succeeds. The less dangerous choice of talking to him misses out on the documents, which happen to be wherever the group chooses to hide.

During the game, refer to your scene map not only to bring in the choice points, but to remind you to show the players that their choices mattered. Find a way to hint that they did something well, and that it helped them in a concrete way. In the above example, you might note that if they hadn’t hidden from the caretaker, they would never have found the documents.