With Kevin Kulp’s TimeWatch RPG blasting through Kickstarter as only a chronoton can, you may be asking yourself if you can put time travel in other GUMSHOE games. We at Pelgrane are not in the business of telling you not what not to do with GUMSHOE. (Unless you want to use it to light your Hibachi indoors. In which case, don’t do that.)

That caveated, here’s how you might do it in the various existing GUMSHOE settings.

One of my favorite treatments of time travel comes, of all places, from an old Batman comic. And not during a cool Batman phase, but from the kooky silver age. In that story, the details of which my memory is doubtless mangling, Batman and Robin go back in time hypnotically. (In fact, now Googling “Batman time 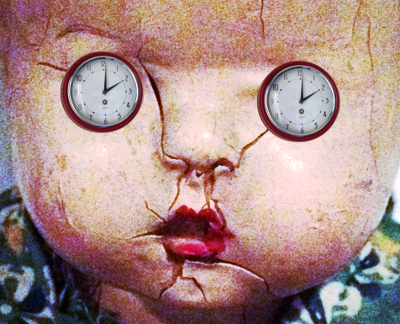 travel”, I find that I like this idea because I’m remembering it wrong.) In my memory’s mistaken version of how this works, they possess the bodies of their ancestors, who happen to be conveniently located and remarkably similar in appearance in ancient Rome, the old west, the Viking era and so on.

Lovecraft likewise treats time travel as a mental journey, making it the specialty of the Great Race of Yith. In a Trail game you need go no further than to have a series of weird murders committed by a victim of Yithian possession. When the investigators capture the first suspect, the Yithian simply jumps to someone else—perhaps a PC whose player is absent that session—and forges ahead with the mayhem. To really shut down the Yithian menace, the group must figure out what the entity is trying to accomplish, and then take action to ensure that it is no longer possible. Otherwise the body-hopping from the ancient past continues.

Scrubbing the Mythos detail from this idea for The Esoterrorists or Fear Itself allows you to reverse the direction of travel. Outer Dark Entities come from the future, when they have already breached the membrane, to create the conditions that will later allow them to breach the membrane. They can’t travel directly into this time, but possess those emotionally destabilized by Esoterror provocations. Again the problem is that stopping one meat-form merely slows them down, requiring them to find a suitably vulnerable replacement. The definitive solution depends on rendering what changes they’re trying to wreak in the timestream impossible. After the Veil-Out, the Ordo Veritatis might take temporary relief in the thought that they’ve prevented a future in which their demonic foes win. But plenty of additional ways for them to do it remain, as a fresh manifestation quickly demonstrates.

The conceit in this mutant-powered police procedural is that all weird abilities are already well explicated by science. If you do want to invent a mutant time travel ability you have to find a spot for on the Quade Diagram. Somewhere out near sector F00, where the weirdo dream manipulation appears, might fit the bill. You also want to establish the effects of time manipulation as already measurable, if not fully understood. So perhaps a time distortion field might emit some sort of radiation that enters the bloodstream, or induce over-production of a particular preexisting hormone. As members of the Heightened Crimes Investigation Unit you can perform tests on tissue samples to determine whether victims, alive or on a morgue examination table, were exposed to time altering energies. Finding out who committed the time crime would then be a matter of finding out which local mutant miscreant has the mutation in question. That said, given the down-and-gritty reality level of Mutant City Blues superheroics I would be inclined to make time travel something that tantalizingly almost seems to exist, until the detectives get to the real truth of the matter. Perhaps false rumors of time travel could be connected to the alien beings some people in the world credit with the Sudden Mutant Event that created all weird powers.

The space opera setting of Ashen Stars seems tailor-made for timey-wimey activities. Like several sources of its inspiration, it includes godlike aliens. Or at least there used to be godlike aliens, the Vas Kra, who have devolved into the all-too-moral vas mal. And with those in the mix, even if only in the setting’s past, anything can happen. That allows you to nod to this key genre element without introducing brain-cracking paradoxes that rightly belong in TimeWatch territory. Needless to say the shift from universe with time travel to universe without would be an outcome of the Mohilar War. We might take a cue here from the current, degraded morphologies of the Vas Mal, the former godlike aliens. Now they look like classic UFO grays, which hook up to the motif of missing time. Perhaps in the Ashen Stars universe, missing time derives not from hypnosis or erased memories but from proximity to time travel and its contradictions in minds not capable of handling it. Back in the 20th century, when the Vas Kra came to earth to meddle with the human mind, those taken up into their vessels suffered gaps in understanding because they brushed too close with their transtemporal natures. This leads to the theory, oft-mooted by residents of the Bleed, that the Vas Kra ended the Mohilar War by interfering massively in the past of those forgotten beings. It explains how the war ended, how the Vas Kra lost so much energy that they had to devolve, and why no one remembers that this happened. The fear that this is so leads at least one powerful movement to oppose all efforts by the vas mal to reconstitute themselves, lest time travel come back, unleashing chaos throughout the cosmos—maybe bringing back the Mohilar, too.

What if the vampires are time travelers? They’re humans who, sometime in the future, discovered how to move through time. Problem: doing so warped their bodies. They became vulnerable to sunlight and had to drink the blood of humans uncontaminated by chrono-energy to survive. Their added strength and resistance to damage (except to the brain or heart) hardly counts as a fair trade. So they send agents back to the past, to prevent the chain of events that leads to their own development of time technology. Stopping those events requires a grand upsetting of the geopolitical power structure. To achieve this they must penetrate and destroy the world’s intelligence agencies. The PCs know too much about this, even if they don’t believe the truth, and hence find themselves on the run from somewhat sympathetic vampires from the future. Who still want to pulp them and take nourishment from their juices.