A GUMSHOE core clue can be seen as a key, giving the PCs access to a door, behind which more of the story waits. With the key, they can interact with, change, master, and adjust that story.

Sometimes a core clue can be a literal key. Literal for the characters, that is, and imagined by the players and GM. The appearance of a mysterious key is all the 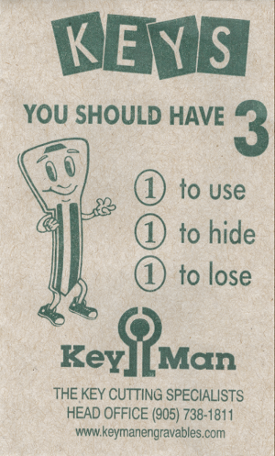 premise you need for any GUMSHOE scenario, whatever the game.

To make this work you need two elements:

The simplest way to move the investigators from the discovery of the key to the lock it opens is to have whoever sent it helpfully supply the address. In that case you should open the scenario with the investigators already there, with key in hand.

To make the transition interesting, give them a reason to gather additional information before going to the site. For example, if they know Quandos Vorn wants them to go there, they might want to scout for traps and evidence of his current crimes before arriving.

Alternately, the key becomes a pipe clue, to pay off later. Here the investigators are already on another case, and the key arrives without explanation or a means of finding its corresponding lock. Later their inquiries lead them to a locked door or box, and voila, they know what the key is for.

The big trick, and the exercise we leave to you, the GM, is to make sure that whatever they find when they turn that key justifies the build-up.