New creature for The Esoterrorists or Fear Itself

A hole opens up in the road outside your house. You pay no attention to this. Guarded by construction fence, it shows every sign of being regular repair work. Maybe they’re fixing the water mains. Or resurfacing the pavement. But then it gradually dawns that you never see anyone working on it during the day. It couldn’t possibly have opened up during the night, could it? You’d have heard them, and been disturbed by the noise. 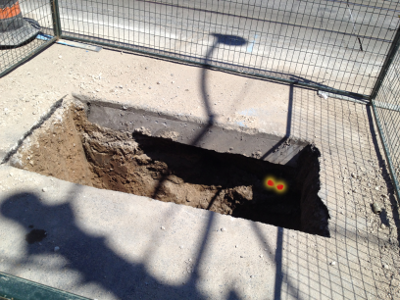 What construction projects get done in the darkness?

Projects by the workmen do. These beings from the Outer Dark materialize beneath busy urban areas. Drawn to neighborhoods in flux, they absorb and reflect anxieties of homeowners and renters alike. The nature of the change matters not. They show up where foreclosures are rampant, and where rising rents threaten to price out longterm residents. Anyone who gazes down into their holes becomes a psychic power battery. Once empowered they sneak from their tunnels, unlock your doors, and to stand over your bed at night, drinking your essence. As you start to die, your symptoms mimic those of hazardous chemical exposure. Doctors may try to find the source of the contamination, but no matter how many soil tests they perform they never turn up the real truth.

To end an infestation you have to descend into their tunnels. Once underground one finds a labyrinthine dig defying ordinary geometry. Stopping them means finding the original gateway to the Outer Dark. The workmen, with their helmet-like heads, glowing eyes and skulking bodies, individually pose no greater threat than an ordinary person. But there are so, so many of them. And if they take you out in their subterranean home ground, you join their ranks, slaving eternally for more scraps of emotional residue…