When I run Hillfolk in a single session demo, I downplay the procedural resolution system.

In the mode of play DramaSystem is tuned for, the extended campaign, the procedural system does the job set out for it. 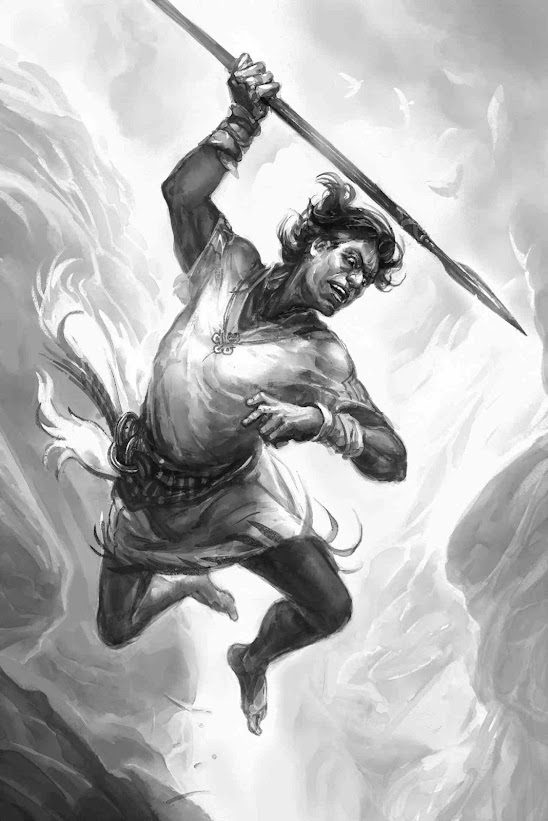 (For those who haven’t played yet, a procedural scene is one in which one or more of the main characters confronts an external obstacle. They raid a neighboring clan, try to convince a Northern potentate to send her trade route through their village, or go out hunting the lion that has been preying on their horses. Procedural scenes exist as an occasional spice in a game mostly concerned with, you guessed it, drama—scenes in which characters seek emotional rewards from one another, in pursuit of their inner desires.)

Because procedural scenes occur infrequently, it’s okay to break for a multi-step process that shifts the pace. The procedural system given in the book allows for suspense, with the progress of the procedural scene unfolding in stages. Players can affect the outcome by choosing to play a green, yellow or red token, with values in stoplight order: green is best, red worst, yellow in between.

By giving the procedural scenes a separate economy, the rules emphasize the sharply different narrative weight these scenes are meant to have. (For the same reason GUMSHOE presents one system for its key element, the investigation, and another for its equivalent of procedural actions, the roster of general abilities.) Shifting to procedural is a big deal; the game wants you to think twice before reflexively turning toward it.

To that end, the rules allow players to simply specify that their characters have accomplished procedural things—or failed to, for that matter. So long as no one objects to the advancement of the narrative, the event becomes part of the story.

For example, in our playtest series, one of the players decided that a neighboring village had attacked the clan, leaving the corrals in flames. Another player could have objected and asked for a procedural scene to see if the clan could have driven them off before they got that far. But because it raised the stakes and made the story more interesting, no one did.

In a single-session demo, I tell players that the procedural system exists, but that we’ll have more time to explore the heart of the game, the dramatic interplay, if we set it aside. I encourage players to rely on the narrative challenge mechanism. Generally players don’t object to procedural events introduced through narration by their fellow players. If they do challenge, the proposing player withdraws or adjusts.

This suits my agenda as someone who wants to teach the game and emphasize its main point of difference with other similar RPGs.

However, you may find yourself playing a DramaSystem game for a single session without treating it as a demo. If you know the procedural system, you can certainly use it.

Or you might prefer an alternate approach that collapses the time spent on procedural resolution.

Here are a few of ideas, all unplaytested. If you do use them, let me know if they work.

Players vote on whether to allow the action to happen as narrated by the scene caller. The GM breaks ties.

This one actually fits the rules as written. Players may give their drama tokens to other players at any time.

(Drama tokens act as the game’s central currency. You earn them when you either give in to someone who wants something from you, or when you ask for something and are rebuffed.)

A player who objects to a proposed narrated outcome can ask for any number of tokens as payment for withdrawing the challenge.

This risks a spiral in which players object just to get tokens, or compete to be the first to issue a challenge. To solve the second problem, generate a new precedence order to see which of the objectors gets the tokens. The fact that some players will want the procedural action to take place should limit this dynamic.

You might make the right to challenge a scarce resource as well, by saying that each player gets only one challenge per game. Although most players won’t wind up challenging even once, people do like to hoard resources just in case they need them.

Draw to a Total

First, determine whether all the characters are working toward the same goal against some other opposing force, or have different stakes in the outcome. In each case, two sides draw cards, seeking a higher total of values than the other. Jacks are worth 11; queens, 12; kings, 13: aces, 14. If both players and GM get the same total, the players win.

Players acting together: In the first case, each participating character draws a card in turn, starting with the player to the left of the scene caller, so that the caller is last to draw. After each player draw, the GM draws a card. If the players’ total meets or beats the GM’s, the players succeed. If not, they fail.

Player vs. player: When players are pitted against each other, they divide into sides. The two sides alternate, drawing one card apiece, with the scene caller’s side going first. If the caller’s side meets or beats the opposition, the caller’s proposed action succeeds.

If you want to mix the drama token economy into the procedural outcomes, you could try allowing participants, including the GM, to spend tokens to add more cards to a pile, at a rate of 1 token per card. Tokens spent return to the kitty. (I wouldn’t recommend this, because it reverses the build that brings more tokens into play during the early stages of a session. But some people really want to get drama tokens all up in their procedural grille.)